In the words of art historian Michael Asbury, Neoconcretism ‘has gained international notoriety while remaining contextually obscure.’¹ The first part of this statement points to the late and uneven international reception of the Brazilian avant-­garde, with its emphasis on Lygia Clark and Hélio Oiticica. The problem is less that Clark and Oiticica have been given precedence over other artists than that the widespread understanding of their own trajectory has also proven to be uneven (to say the least). So, for example, it becomes much easier (and more seductive) to reclaim Oiticica’s thoughts on participation or his forays into the culture of the Brazilian favelas than to painstakingly track, for example, his rigorous visual dialogue with Mondrian, Malevich or Klee (alongside the reception of these artists within the context of Neoconcretism). It is ironic that our historical armature seems much more at ease with recuperating the former – especially in the aftermath of relational aesthetics, for instance – than with incorporating the latter – which might suggest a somewhat unpleasant re-evaluation of the limits usually ascribed to whatever we call ‘modernism’. In this context, the name ‘Neoconcretism’ acquires a rather magical effect: by simply noting that Clark and Oiticica originate from it, one can duly acknowledge their engagement with constructive‐oriented geometric abstraction without really having to consider the more profound consequences of the fact that, say, Mondrian and Mangueira (the most famous favela in Rio, and the one Oiticica frequented) belonged to the vocabulary of one and the same artist. It turns out, then, that the second part of Asbury’s statement – contextual obscurity – does serve a purpose: that of turning Neoconcretism into a mere ad hoc reference.

What if we graded the ‘contextual awareness’ of a writer by the number of Neoconcretist artists he or she is able to invoke? A beginner would remain stuck with Clark and Oiticica (and perhaps Lygia Pape as well), whereas an initiate might be able to mention Amilcar de Castro or Franz Weissmann. The mere mention of Décio Vieira (1922-­1988) – alongside the likes of Rubem Ludolf or Osmar Dillon – would then be a sure sign of expertise, well bound within the language barrier that surrounds Brazilian scholarship. Things are not so simple, of course, and the truth is that here there are no Brazilian ‘subjects supposed to know’ – to use a well­‐known Lacanian formula. Vieira’s position in Brazil is perhaps more problematic than that of Neoconcretism abroad: his notoriety is highly local, and mostly superficial. This is why the recent exhibition Décio Vieira: Geometric Investigations, curated by Brazilian art historian Felipe Scovino – the first solo show of the artist since his death in 1988 and the first ever in São Paulo – is genuinely path‐breaking.

By foraging through private collections, Scovino managed to assemble an impressively representative set of works, ranging from Vieira’s early participation in the Frente Group (the highly unorthodox core of Rio de Janeiro Concretism in the early 1950s) through his Neoconcrete period and beyond, up to the artist’s final years in the 1980s. And it becomes quite clear that Vieira deserves a better critical fate than that of a name to be dropped every now and then (which makes one dearly regret the fact that there is no catalogue for the exhibition). His use of colours alone demands reflection, pointing to some idiosyncratic (but also crucial) aspects of Brazilian Concretism. Many paintings rely on a skilfully enacted and somewhat contradictory balance: well‐defined geometric divisions seem hardly able to keep smoky areas of colour to insinuate smoother, more nuanced transitions. The ‘smokiness’ comes from Vieira’s recurrent use of egg tempera, a technique he adopted in the wake of his friend Alfredo Volpi, an Italian‐Brazilian painter of an earlier generation who temporarily flirted with Concretism in the 1950s.

One may also remember the indictment of Rio de Janeiro Concretism by the shocked leader of its orthodox São Paulo counterpart, Waldemar Cordeiro: ‘There is even brown in these paintings’.² In 1956, both groups finally managed to show together, but instead of celebrating the formation of a unified, national front, the event became a huge case of mutual misrecognition – or of the recognition of their irreconcilable approaches. Of course, it was precisely in having to defend against accusations such as Cordeiro’s that the poet Ferreira Gullar ended up theorizing Neoconcretism (one just wonders how Cordeiro would react to Gullar’s relatively recent branding of Vieira’s pastel drawing technique as a kind of ‘sfumato’).³ As a group, Neoconcretism was hardly coherent (a point Scovino is keen on stressing). It makes sense: after all, one may think of it as radically pushing the category of ‘concrete art’ to its limits (which were, in turn, theoretically redefined). 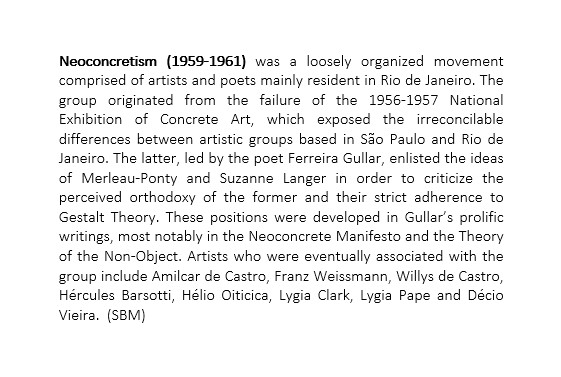 One particularly brilliant example in this case is a 1959 monochromatic drawing by Vieira, where different geometric sections are uniformly filled with blue pastel (Sem Título, pictured). The differentiation of the areas is minimal, but eloquent: it relies solely on directionality and on the varied intensity with which Vieira pressed the pastel against the highly textured paper. The dominant centre of the composition is a blank lozenge, whose whiteness suddenly coheres into a colour of its own, in contrast to the whiteness that grounds the coloured areas, visible in the deep paper recesses that remain unmarked. Animated by tonal transitions and by the direction of the marks, the drawing enacts a circular movement around the blank centre – like an abstract windmill. The bottom half is lighter and expansive, suggesting a cool, gaseous ascent; the darker patches in the top become compact and weighty in contrast, leading one’s gaze back downwards – an unexpected sense of gravity instils itself. All areas in the drawing are materially the same, but phenomenologically distinct; their juxtaposition testifies to the subtle, but often dazzling achievements of Neoconcretism, which supported Gullar’s enthusiastic readings of Merleau‐Ponty. The latter, an integral part of the movement’s cultural atmosphere, can hardly be said to stand as programmatic. Despite (or maybe because of) its rich diversity, Neoconcretism lasted only two years. Such fleeting complexity grows richer the more we are able to look and study works by Vieira and others – and is by far more challenging than a stable, empty and merely convenient signifier.